I read through this today and found it interesting.  For more information contact TU Vienna.

Long-sought-after ‘glueball’: Exotic particle may have been discovered 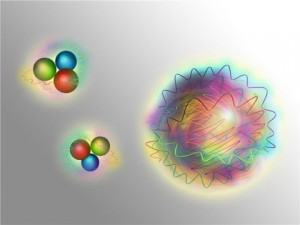 Nucleons consist (left) of quarks (matter particles) and gluons (force particles). A glueball (right) is made up purely of gluons.
Credit: Image courtesy of Vienna University of Technology, TU Vienna
Summary:
Scientists have calculated that the meson f0(1710) could be a very special particle: the long-sought-after ‘glueball’, made up entirely of gluons — the “sticky” particles that keep nuclear particles together.

Scientists at TU Wien (Vienna) have calculated that the meson f0(1710) could be a very special particle — the long-sought-after ‘glueball’.

For decades, scientists have been looking for so-called “glueballs.” Now it seems they have been found at last. A glueball is an exotic particle, made up entirely of gluons — the “sticky” particles that keep nuclear particles together. Glueballs are unstable and can only be detected indirectly, by analysing their decay. This decay process, however, is not yet fully understood.

Professor Anton Rebhan and Frederic Brünner from TU Wien (Vienna) have now employed a new theoretical approach to calculate glueball decay. Their results agree extremely well with data from particle accelerator experiments. This is strong evidence that a resonance called “f0(1710),” which has been found in various experiments, is in fact the long-sought glueball. Further experimental results are to be expected in the next few months.

Forces are Particles too

Gluons can be seen as more complicated versions of the photon. The massless photons are responsible for the forces of electromagnetism, while eight different kinds of gluons play a similar role for the strong nuclear force. However, there is one important difference: gluons themselves are subject to their own force, photons are not. This is why there are no bound states of photons, but a particle that consists only of bound gluons, of pure nuclear force, is in fact possible.

In 1972, shortly after the theory of quarks and gluons was formulated, the physicists Murray Gell-Mann and Harald Fritsch speculated about possible bound states of pure gluons (originally called “gluonium,” today the term “glueball” is used). Several particles have been found in particle accelerator experiments which are considered to be viable candidates for glueballs, but there has never been a scientific consensus on whether or not one of these signals could in fact be the mysterious particle made of pure force. Instead of a glueball, the signals found in the experiments could also be a combination of quarks and antiquarks. Glueballs are too short-lived to detect them directly. If they exist, they have to be identified by studying their decay.

“Unfortunately, the decay pattern of glueballs cannot be calculated rigorously,” says Anton Rebhan. Simplified model calculations have shown that there are two realistic candidates for glueballs: the mesons called f0(1500) and f0(1710). For a long time, the former was considered to be the most promising candidate. The latter has a higher mass, which agrees better with computer simulations, but when it decays, it produces many heavy quarks (the so-called “strange quarks”). To many particle scientists, this seemed implausible, because gluon interactions do not usually differentiate between heavier and lighter quarks. Anton Rebhan and his PhD-student Frederic Brünner have now made a major step forward in solving this puzzle by trying a different approach. There are fundamental connections between quantum theories describing the behaviour of particles in our three dimensional world and certain kinds of gravitation theories in higher dimensional spaces. This means that certain quantum physical questions can be answered using tools from gravitational physics.

“Our calculations show that it is indeed possible for glueballs to decay predominantly into strange quarks,” says Anton Rebhan. Surprisingly, the calculated decay pattern into two lighter particles agrees extremely well with the decay pattern measured for f0(1710). In addition to that, other decays into more than two particles are possible. Their decay rates have been calculated too.

Up until now, these alternative glueball decays have not been measured, but within the next few months, two experiments at the Large Hadron Collider at CERN (TOTEM and LHCb) and one accelerator experiment in Beijing (BESIII) are expected to yield new data. “These results will be crucial for our theory,” says Anton Rebhan. “For these multi-particle processes, our theory predicts decay rates which are quite different from the predictions of other, simpler models. If the measurements agree with our calculations, this will be a remarkable success for our approach.” It would be overwhelming evidence for f0(1710) being a glueball. And in addition to that, it would once again show that higher dimensional gravity can be used to answer questions from particle physics — in a way it would be one more big success of Einstein’s theory of general relativity, which turns 100 years old next month.

The above post is reprinted from materials provided by Vienna University of Technology, TU Vienna. Note: Materials may be edited for content and length.